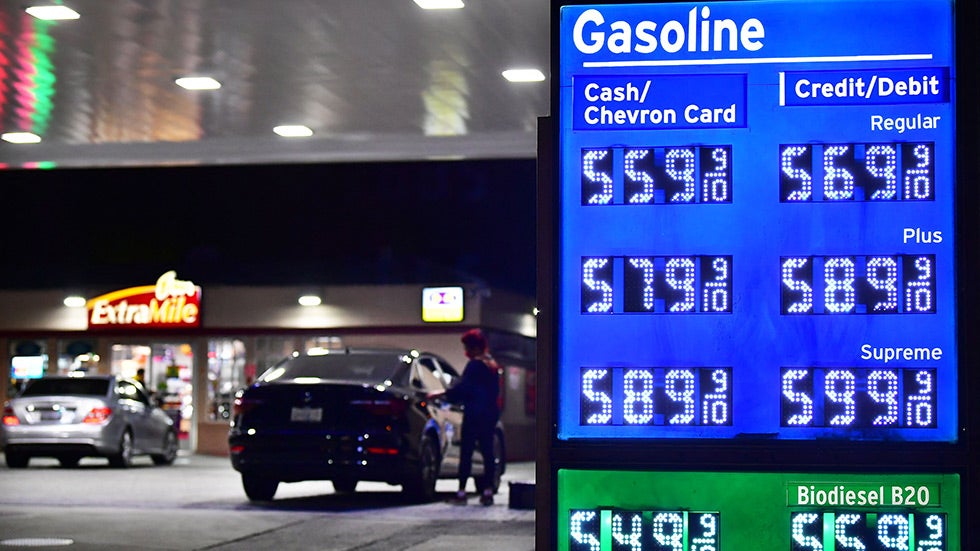 So here we are: war and pandemic-tinged underinvestment are driving up the prices of everything from natural gas and coal to wheat and battery metals.

Of most concern is the oil market. Soaring prices pushed US gasoline to over $4, a third higher than a year ago, and diesel rose even more sharply, to over $5. Oil inventories in the industrialized world have fallen for 14 straight months. And countries from Japan to the United States are operating emergency stocks.

In the midst of this cyclone of commodity upheaval, there is an oasis of calm: the golden saloons of OPEC.

Somehow, the cartel movers and shakers – Saudi Arabia and the United Arab Emirates – decided that the best response to the global commodity panic was to not react at all.

The brevity of recent OPEC meetings symbolizes the rigidity of the cartel’s strategy. OPEC’s March rally – amid the whirlwind prices of Russia’s invasion of Ukraine – lasted 13 minutes. The war was not even mentioned. Subsequent meetings were just as brief.

The OPEC rallies conclude with the same mantra: We continue our post-pandemic production recovery to just over 400,000 barrels per day per month. Goodbye.

There is a post-truth quality to OPEC’s statements: the markets are sufficiently supplied. Politics is the problem.

On May 10, UAE Oil Minister Suhail al-Mazrouei said oil markets were in balance, but underinvestment would threaten OPEC’s ability to muster sufficient supplies in the future. as the pandemic subsides.

In the future? How about now? Part of OPEC’s mission statement is to “ensure the stabilization of petroleum markets to ensure an efficient, economical, and steady supply of petroleum to consumers.”

OPEC is sitting on about 3 million barrels a day of spare oil production capacity. Add Iran, which is under sanctions, and there are at least 4 million b/d idle.

Much of this capacity could have already come online, as the International Energy Agency, the White House and the Japanese government have pointed out. But while Saudi Arabia and its allies are quietly redirecting flows to Europe, they have refused to tap idle capacity more aggressively.

The data shows that OPEC is not even following its drip feeding schedule. Angola, Nigeria and others are underproducing their quotas. And while production in Saudi Arabia and other Gulf states is generally holding up, they haven’t seized opportunities — as they have in the past — to make up for underproduction elsewhere.

In short, OPEC is acting strangely. Normally, when oil markets are under such pressure, we see the Saudi oil minister “bashing” the market, to reassure nervous consumers and governments. If words fail, the next step is a production increase that frees up spare capacity.

Saudi Arabia has for decades maintained a reserve of spare capacity for this sole purpose.

Stability services are OPEC’s gift to the world. A scientific paper has estimated that OPEC’s spare capacity provides the global economy with a benefit worth $193 billion a year. Such actions help maintain the viability of oil in the face of the rise of alternative fuels, including electricity. This year, OPEC is accumulating the profits, in the form of a giant financial windfall.

So why would OPEC disavow its own mission statement?

To be fair, the alternative explanations offered by OPEC are partly true. Refining bottlenecks drive up gasoline and diesel prices. Funding constraints are slowing the reaction of US shale producers. Congressional NOPEC legislation, threatening the cartel with U.S. antitrust action, would make matters worse.

None of this explains why OPEC is sitting on spare capacity that would reduce oil prices. Three factors suggest a potential rationale.

The first is the Russia effect.

Russia is now a member of the vast OPEC+ cartel and an avowed alliance partner of Saudi Arabia for “decades and generations”. Russia is in no mood to lower costs for voters in hostile countries that sanction it and send arms to Ukraine.

Second, the leaders of the United Arab Emirates and Saudi Arabia have a growing list of grievances with the United States.

These include what the monarchs see as insufficient US aid in their war in Yemen or to defend them against Houthi reprisals.

Another sore point is the Biden administration’s return to nuclear talks with Iran. In Riyadh, President Biden’s reputation is further tainted by his campaign goal of making Saudi Arabia a “pariah”.

Of course, irritations have always been part of diplomatic relations between the United States and its Middle Eastern partners.

What is new is the willingness of Riyadh and Abu Dhabi to use oil prices as leverage to address these grievances. This hasn’t happened since 1973, when Saudi King Faisal used an embargo to punish the United States for helping Israel retain territory it captured from Syria and Egypt.

The third confounding factor is the energy transition. Governments have begun to shift the huge energy system dominated by fossil fuels to cleaner technologies.

These factors may be behind the description of “political” problems by OPEC oil ministers as if it were a recent phenomenon.

When it comes to oil, politics is inevitable. Oil is the lifeblood of the global transportation system – and of autocratic regimes like those in Riyadh and Abu Dhabi.

Everyone is better off when markets are stable. OPEC ministers are missing an opportunity to bring some calm to a tumultuous world. They might even generate goodwill in the process.

Jim Krane is the Wallace S. Wilson Fellow for Energy Studies at Rice University’s Baker Institute and the author of the book, ”Energy realms.”